Loyalty credits accumulated during 04/01/21 - 06/30/21 are eligible for cash back on purchases made during 07/01/21 - 07/31/21; these credits must be used by 07/31/21 or they will expire. Credits earned on purchases during 07/01/21 - 07/31/21 will not be available for use until the next loyalty redemption period. Only web account holders who live in the USA and do not have special pricing or other contractual agreements with us are eligible for Tundra's Loyalty Program. Learn more at www.etundra.com/loyalty-program/ 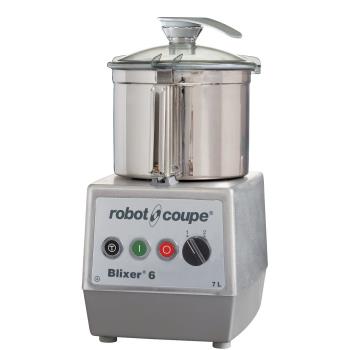 Food preparation can make or break any restaurant venue, and the Robot Coupe Blixer 6 was developed to take the hard work out of preparing mixed liquid or semi-liquid foods. It should be done quickly and efficiently, using tools like the Robot Coupe 2 Speed Blixer with 7 Qt Bowl (BLIXER 6). One of the fastest food processors around, the BLIXER 6 has three phases and two speeds, capable of producing anywhere from 20 to 100 pureed soups and sauces during prep hours. Its polycarbonate lid has a special vent that will allow chefs to add both liquids and other ingredients while processing, without having to stop. The high speed blade and scraper arm on a Robot Coupe - BLIXER 6 - 2 Speed Blixer with 7 Qt Bowl are detachable, and all break down for quick and efficient cleaning. You can now liquefy food as well as chop, grind, puree and emulsify with one machine – the Blixer!

Customers who bought this also bought

If you’re running a foodservice operation, chances are you need an ice machine (or a few). But what kind? There are so many different options when it comes to ice machines. To...
Read More